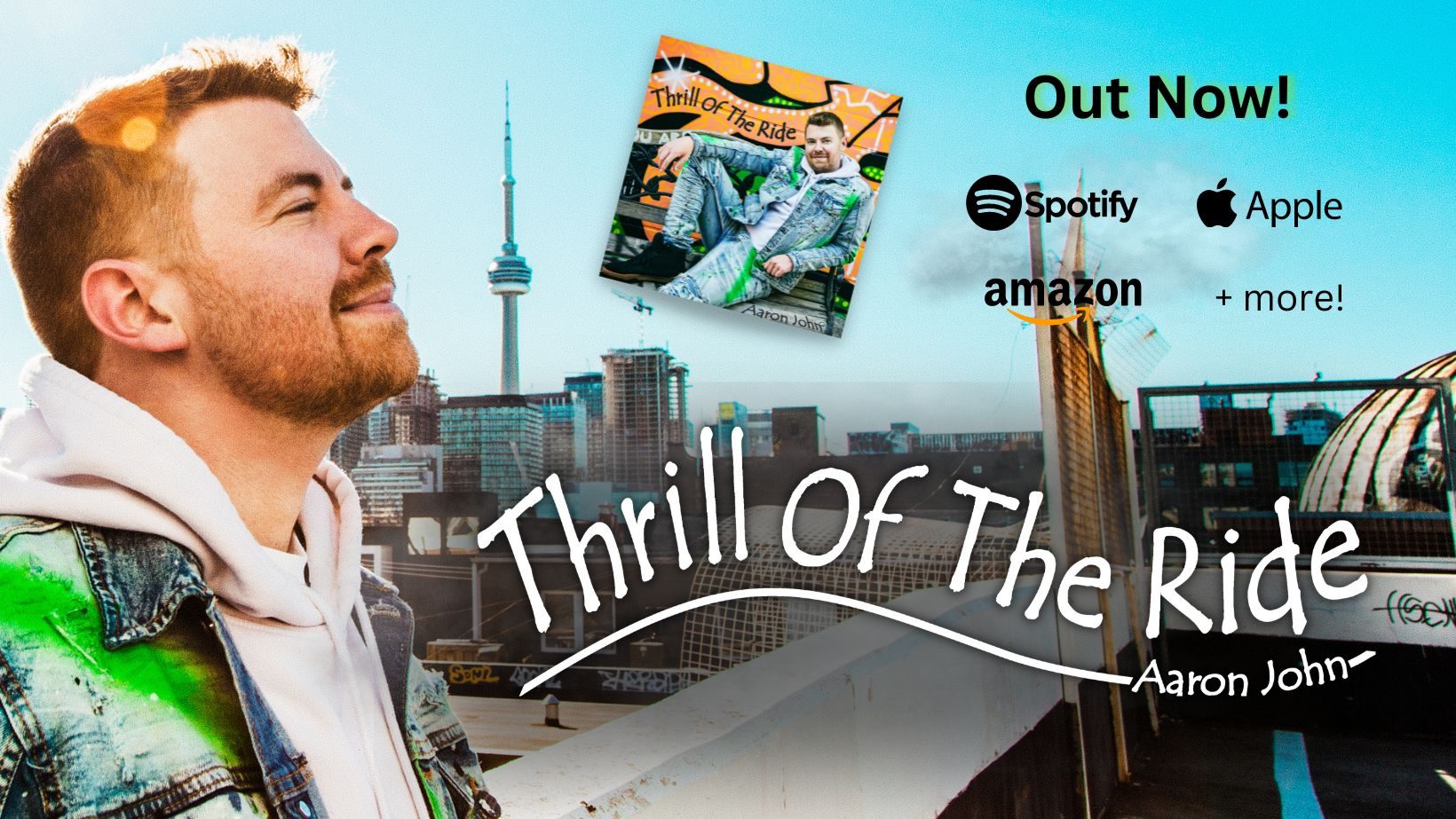 Canadian singer-songwriter and recording artist Aaron John combines his love for pop, rock, kpop, hip-hop and jazz into his own unique flavour of music. He wows audiences of all ages with live looper-pedal performances that layer catchy rhythms and fun inspiring vocals. The multi-instrumentalist returned home to Pickering, Ontario in 2019 to pursue a career in music after travelling to 17 Countries and teaching in South Korea for several years. His debut single “Fresh” was released in April 2022 and named #1 song of the week by Canada Beats, and received praise from the Toronto Star. With streaming numbers steadily rising, John is gaining momentum with the release of his new upcoming single “Thrill Of The Ride” (Nov 4, 2022)

“Music soothes the soul, and it is my goal to leave audiences energised and inspired with mindful lyrics and catchy melodies set to have a positive impact on mental health.”

As a child, Aaron listened to a lot of classic rock with his parents but was drawn to the complexity of instrumental music. At age six he listened on repeat to the Jurassic park CD until he could identify every instrument. In his teen years he expanded to hip-hop and alt rock with Eminem, Our Lady Peace, Weezer and All American Rejects.

At eighteen, Aaron John suffered a broken ankle that forced him to give up basketball, but provided time to connect with playing music for the first time. He found a tiny toy piano and discovered his knack for playing music by ear. He started with songs from video games like Legend of Zelda and Final Fantasy, but before he knew it he found himself exploring old favourites from Jurassic Park and eventually could listen to almost any song he heard on the radio and play it. He picked up guitar and learned it in much the same way, but soon turned to song-writing when overcoming a broken heart. Writing songs that help heal quickly became an obsession, and has stayed with him ever since.

Aaron John became passionate about helping disadvantaged youth achieve their goals after spending many summers working at a camp for children with physical challenges. He went on to study Child and Youth Care at Toronto’s Metropolitan University working firsthand with children in unthinkable circumstances at Children’s Aid Society (CAS) and within disciplinary classroom settings. He found music was a way to uniquely connect with children and even help them deal with their feelings.

“Music can turn ugly emotions into something beautiful that others relate to and become inspired by.”

Hungry for adventure and inspiration, Aaron moved to South Korea to teach English following graduation. He was known as the “rockstar English teacher” because he used music to connect with the kids and teach them English. Aaron John became a local buzz in the city of Daegu busking and performing whenever and wherever possible. After 4 years of adventure and travelling to 17 countries he longed for the comfort of home and would  return to Pickering, Ontario with a far greater, more worldly view on life than he left with.

“Seeing the world and learning the history of the people that live there allowed me to see the world as a smaller place – we are all connected and have so much to learn from one another.” Aaron John

Soon after arriving home Aaron began teaching music at a Montessori school, but once the pandemic was declared his position was eliminated. He dove into musical studies online with a focus on songwriting and theory. He pursued formal training through the Royal Conservatory of Music (RCM) for the first time and started his own business teaching piano, guitar, ukulele, and songwriting to people of all ages. His students range in age and ability. , – even accredited RCM students want to work with him because of his keen abilities to improvise and create original music.  In just a few short years, and despite a global pandemic, there is now a waiting list to take his classes. Without the ability to perform live gigs during pandemic lockdowns, Aaron began to connect with audiences on Twitch and became an affiliate overnight.

Making a living with his musicality was a dream come true for John but it was only part of the equation. In April 2022 he launched his career as a recording artist with the release of his debut single ‘Fresh’ on all streaming platforms. The song was well received and was featured as #1 song of the week by Canadian Beats. Comments like ‘this song changed my life’, or ‘this is so good it should be in a Disney Movie’ motivated Aaron John to continue pursuing his dream to its fullest and he is ramping up to release multiple singles this year.

The second single ‘Thrill Of The Ride’ (released on all streaming platforms on November 4th) is an introspective indie pop tune about living in the moment and enjoying the journey. Travelling to different parts of the world gave John the insight to write this song. Moving across the globe and adapting to a new culture taught him to look for the silver lining and not sweat the small stuff.

“The ups and downs in life can make us or break us; I try to stay in the moment and enjoy the journey.”

Aaron can be found doing local gigs around the GTA. Your support is always appreciated.